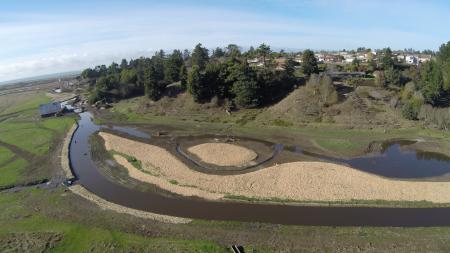 Martin Slough is part of the Elk River watershed, which feeds into Humboldt Bay, and has been identified by the California Department of Fish and Wildlife as playing a key role in the life cycle of coho salmon, providing ideal rearing habitat for juvenile coho. In 2006, Martin Slough was listed under the Clean Water Act as impaired for sediment and siltation, citing impaired water quality, impaired spawning habitat, and increased depth of flooding due to sediment. In response to these stressors, the Martin Slough Enhancement Project was developed with the goal of enhancing fish habitat for endangered coho salmon and reducing the extent and duration of flooding. This incredibly complex and important project has required nearly twenty years of diverse partnerships, problem solving and perseverance, and today remains focused on that goal.

The Redwood Community Action Agency (RCAA), in cooperation and partnership with many key stakeholders, has been leading the Martin Slough Enhancement Project since it began in 2001. The project area encompasses two properties – 40 acres of pasture owned by the Northcoast Regional Land Trust (NRLT) and 120 acres upstream of the NRLT property owned by the City of Eureka and operated as the Eureka Municipal Golf Course. The project was initiated in 2001 when RCAA and partners began preparing a feasibility study, which was completed in 2006. Between 2007 and 2014, RCAA and partners developed designs for a new tide gate and for pond and channel enhancements, and in 2014, the new tide gate was installed at the confluence of Martin and Swain Sloughs.

Implementation began on the Eureka Municipal Golf Course in the summer of 2019, and included widening and deepening the Martin Slough channel and one tributary, the expansion of one off-channel pond, placement of several large-wood instream habitat structures, and revegetation of native riparian and wetland habitat. In 2020, construction continued on the Golf Couse, with further channel enhancements, installation of habitat structures, and the expansion of one off-channel pond and the creation of a new off-channel pond. The final phase of implementation will occur in 2021, and includes placement of a temporary salinity barrier, enhancement of the North Fork channel, and the expansion of a final pond (located on the North Fork). Enhancement work on the Golf Course further improves juvenile coho salmon habitat, and in addition is making the golf course more accessible throughout the year by reducing the impacts of prolonged flooding.

Listen to this Level Up Audio Project Podcast episode, where Projects Coordinator, Morguine Sefcik was interviewed in May 2021 about the Martin Slough Enhancement Project and how it is aiding in reducing flooding risk and restoring endangered fish habitats in a multi-benefit project across levels of government. The Level Up Audio Project is a partnership between FEMA Region IX and Georgetown Climate Center.